Yesterday, with my brother-in-law Nick, friends from Warrior Strength and Conditioning, 1100 students and staff from The University of Manchester in purple t-shirts (one carrying a fridge), and some 34000 other runners, I finished my first 10k race. I say ‘race’; it was a bit of a plod for me really and I wasn’t aiming to beat anybody, but given that 18 months or so ago I couldn’t run for more than a few minutes, I was pretty chuffed to have managed it at all. As a newcomer to running I set pretty modest goals:

and perhaps most importantly, 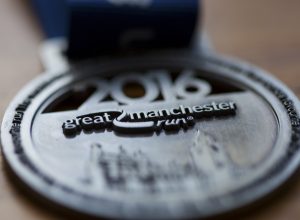 In spite of running with a bit of a fever, I managed all of those things, and even enjoyed it enough to want to have a go at another 10k at some point. I got a medal, a shiny space blanket, and a bag of basmati rice in my finisher’s pack too, so that was nice.

My time of 1:18 is pretty unimpressive but I wasn’t really expecting to do much on that front. But what I am really pleased with is the whopping great big lump of money that’s been raised for the Papillon Clinic as a result of me trudging round Manchester: over £1700 including the Gift Aid.

To everyone who sponsored me — family, friends and anonymous strangers —  thank you so much, your support has been amazing. I’m incredibly grateful to you all.

p.s. thanks as well to Paul Chapman for the photo at the top of the post. Nick, who isn’t from the University, got shepherded into the Purple Wave block because he was with me. You can probably spot him.