This is a story about butterflies and backsides, and it’s a more personal post than my previous ones about computers and cakes, even though the backside in question is not mine. At the end of it, I’m going to ask you to hand some money over to charity.

In 2010 my Mum was diagnosed with bowel cancer. As often seems to be the case with horrible news, I remember the moment with unnatural clarity: it was a pleasant autumn evening, I was standing by my Yaris in the carpark at Cheetham Hill B&Q, and I’d just bought a seven inch immersion-heater thermostat. I knew that Mum had been for a scan that day as a follow-up to an ambiguous FOB test result earlier in the month, but the confirmation that they’d found a tumour still felt like a punch in the stomach.

The good news, in as much as there was any, was that the cancer appeared to be a very early stage, so if it could be sorted out before it caused any problems there was a reasonable chance that all would be well. The less good news was that the location of the tumour meant that the surgery to remove it would leave Mum living with a permanent colostomy bag. Of course, the ‘with a bag’ bit of that is fairly inconsequential compared with the ‘living’ part, but a few hours of reading the scientific literature — something I’m lucky to be able to have access to only because I work at an institution that subscribes to these journals — revealed that there was an experimental therapy available that may be able to destroy the tumour without needing to chop bits of her gut out.

Low-energy contact X-ray Brachytherapy — or the Papillon Treatment to you and me — has been around for a while, but has only recently become a mainstream treatment for bowel cancer. It works like this: a probe is inserted up your bum and manoeuvred through the rectum into contact with the tumour so that it can deliver a dose of x-ray radiation directly to the rogue cells. Because the probe is actually touching the malignant tissue, the level of radiation needed to mess up the cancerous cells is much lower than with traditional ‘external beam’ treatment where the radiation is fired from outside the body and has to pass through healthy tissue to get to the bad bits.

Compared with relatively quick-fix of surgery, the Papillon treatment requires some mental and physical fortitude that isn’t easy to come by soon after a cancer diagnosis: each of the many visits over several months to the clinic at Clatterbridge is accompanied by enemas, a strict pre-visit diet of white mush, as well as various other indelicate scopes and scans. There’s always a risk that the treatment won’t be successful and that surgery will be needed after all. But in my Mum’s case the Papillon Technique worked brilliantly, and some six years later she remains both cancer and bag free.

Back in 2010 the only reason we found out about the Papillon treatment was because my job at the University of Manchester gave me access to the medical literature, but thanks to the fantastic work of Professor Arthur Sun Myint at the Clatterbridge Cancer Centre, the technique was approved by NICE in late 2015 and is now available on the NHS to patients with appropriate symptoms. 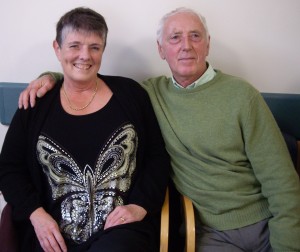 this year I want to try to raise some money for Professor Myint’s clinic as a token of thanks for saving my Mum’s arse, and as a practical gesture to help him continue research into what has been proven to be a life and quality-of-life saving treatment. So I’m going to run the Manchester 10k, and I’d like you to sponsor me.

Those who know me in real life will confirm that I’m not really built for running. I’ve tried to enjoy it, and I’m hugely envious of friends like Philip and Matt who seem to get a real buzz from running (they are both doing more impressive and challenging runs this year too, and you can sponsor them as well if you like). I get a lot of satisfaction from hoiking a heavy barbell around at my gym (the very splendid Warrior Strength And Conditioning), and I’m fine with rowing and cycling and other aerobic stuff. I’ve bribed myself with gadgets and decent shoes, but running still mostly feels like a frustrating way of getting from Point A to Point A while sweating, swearing and wearing more items of lycra than would normally be considered appropriate for a respectable middle-aged academic. Anyway, it doesn’t seem right to sponsor someone to do something they find easy, so that’s okay.

Though there’s no such thing as a good cancer, bowel cancer remains one of the nastiest, and the more ways of treating it the better. So please, if you can, sponsor me by going to my Just Giving page and making a donation. And if you can’t, please spread the news about the Papillon Technique.

p.s. you’ll notice that my JustGiving page is set up to send the money directly to the Clatterbridge Cancer Centre where the Prof. Myint works, because they are a registered charity set up to receive secure online donations; but they’ll route the money to the Papillon Treatment Suite when it arrives.

p.p.s. one of Prof. Myint’s more recent publications ‘Novel radiation techniques for rectal cancer’ is published Open Access so is free for anyone to read.