I saw Alasdair Mcdowell’s Pomona at the Manchester Royal Exchange Theatre last week. It sparked a bit of a weekend obsession.

The play is a masterpiece: a dystopian fairytale set on an abandoned concrete island on the border between Manchester and Salford; it gets inside your head, scratches around upsetting things, then finds a quiet corner and lays eggs. At its heart, Pomona is about our selective blindness to the dark and dirty bits of life — battery farms, sweat shops, brothels — things that oil the modern social machine but that we prefer not to think about too hard. It’s a mobius-strip of a tale, twisting and looping back on itself, slipping seamlessly between the reality of the main characters’  broken lives and a gothic role-playing fantasy told by one of them.

Ollie’s sister has gone missing. She seeks advice from Zeppo (Sean Rigby). In y-fronts, a food-stained vest, parker coat and mismatched leggings, he drives around the ring-road at night, and if you wait long enough, he’ll find you. Zeppo owns most of Manchester — but doesn’t get involved, because getting involved means you have to think about things, and that has consequences. He eats chicken McNuggets. A lot of chicken McNuggets. And likes the Raiders of the Lost Ark. Just don’t look inside the Ark; we all know what happens if you look inside the Ark. Best not think too hard about what’s in the McNuggets either.

We meet Charlie — an awkward twenty-something with a disturbing history who is definitely ‘on the spectrum’. He guards the hatch at Pomona, and is paid not to ask questions about the van that arrives there every night. By day he runs a little-attended Role Playing club. The plot of his invented game, Cthulhu Awakens, entwines itself so tightly with the main story so that it’s hard to tell what’s real and what’s fantasy. We learn that Ollie’s sister is not the only person that’s gone missing. Something bigger and darker is happening at Pomona.

The story is fragmented and told out-of-order, and we’re introduced to characters with no explanation of who they are or why they are in the distressing state in which we find them. What they have in common is that they are all damaged and their lives are accelerating uncontrollably towards something bad. As the threads start to pull together it becomes clear the big picture is much more horrible than any of its already-grim parts.

Pomona is an intense, unrelenting experience, played straight through for an hour and forty-five minutes without an interval. There’s plenty of comedy, but every moment of laughter is paid for several times over by breath-holding, chair-arm clasping periods of horror. The whole cast is really strong, with exceptional performances from Sam Swann as the awkward, gabbling Charlie who is more comfortable in his fantasy persona than in his own, and Rebecca Humphries as the frayed, worn-out sex-worker, Fay. Played in the round at the Royal Exchange, the set is minimal — a slanting concrete storm drain and a metal hatch, and not much more. The few stage effects are all the more powerful for their sparseness. If the play has a message, I think it’s this: those monsters you don’t like to think about? They’re real.

Having seen the play on Friday night, I found it left echoes the following day, and decided to visit the real Pomona. In the daylight, I’m not that daft. I wasn’t exactly sure where it was, but the satnav told me that I’d lived with in a mile or two of the place for several years in my late twenties. I must have driven past it countless times.

The real Pomona is a desolate scrubland. It’s hard to believe that in the 1800s it was once a pleasure garden where the residents of Manchester and Salford would go to escape from the grime of the city. They even sang songs about it.

It had a palace and public swimming pool — that’s until a nearby chemical factory exploded and ruined it all. It’s easier to believe it was then a busy docklands; there’s still one working lock that allows small pleasure boats to hop from the Irwel to the Bridgewater Canal. But today, Pomona is largely a wasteland, and home to the least-used Metrolink station in the network and a company that sells funeral plans.

It’s not an inviting place. Rusting signage along the only road that leads in and out declares ambiguously that the place is Managed by Suchandsuch Security Company; there are warnings that the canal poses a danger of drowning, that the bridges are weak, and that vehicles that ‘become stuck’ should phone for help. Though there’s nothing to say you can’t come here, it’s pretty clear that you’re not really welcome.

The land was acquired in 2011 by Peel, for residential development, and they levelled what was apparently home to several rare species of flower and uprooted mature trees in preparation for something, but seem to have done nothing with it since. Probably best not to think too hard about what else this unusual piece of land — one of the few left in the area not already covered by factories, offices or retail outlets — could have become with a bit more imagination.

It’s easy to see how Pomona-the-place inspired Pomona-the-play. Every surface from the lock gate to the pillars that support the looming Metrolink line is covered in layers of graffiti, much of it surreal and disturbing. Where the tramway overhead provides some shelter, there are abandoned sleeping bags, sodden in spite of the cover. Discarded beer cans, fag packets and the occasional hypodermic syringe lie scattered on crumbling concrete. Nearby, spent firework cases, more cans and bottles, and a pair of underwear. Further along and things are stranger: cowled metal pipes that look like air vents jut out of the mud and scrub. A crow obligingly settled on one of these as I walked past. 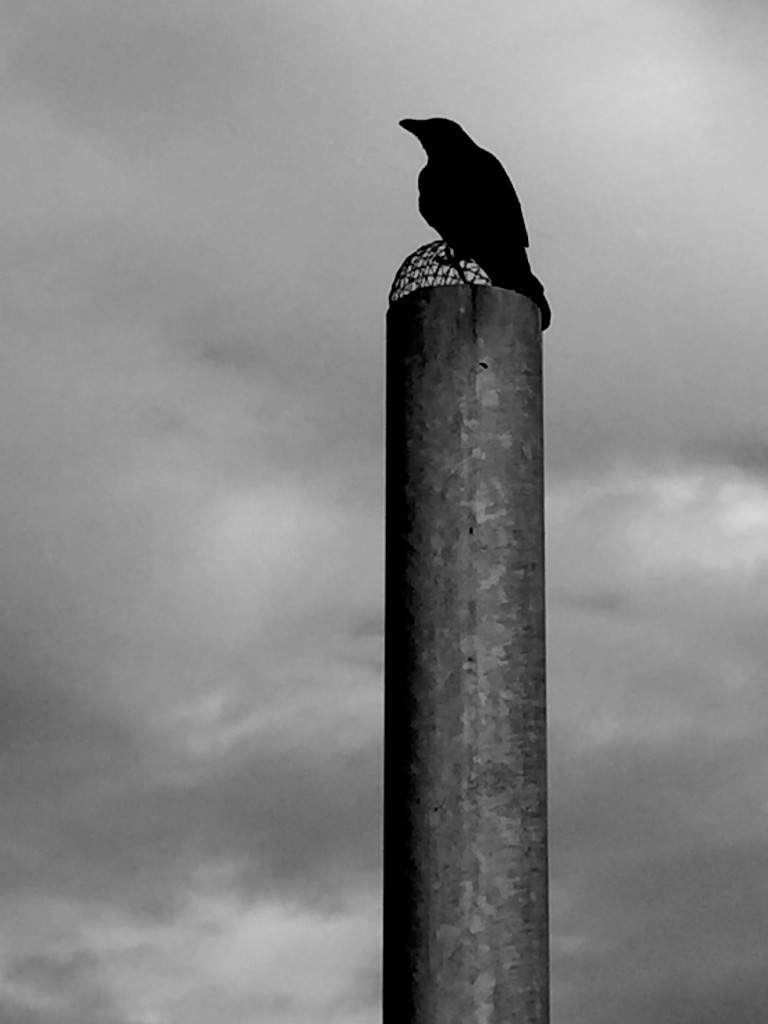 There are open hatches in the ground with rung-ladders that lead down to somewhere. I didn’t go down. Best not to look too hard I think. Consequences.

Pomona is a disquieting place. A weird hinterland with pleasure boats sputtering along on one side, trams shuttling Media City workers between Manchester and Salford Quays on the other. It hangs in an awkward limbo: neither fully urban nor completely wild; accessible but unwelcoming. Neither quite forgotten about, nor properly remembered.

I first heard the name of the place a few years back via poet Ian McMillan, who regularly tweets lovely 140-character observations from his early morning strolls and rail journeys.

It’s appeared regularly in his timeline since, as he takes the tram to Salford Quays to record Radio 3’s The Verb. Here are four of his tweets that form a sort of Elegy to Pomona.

The history of Pomona’s changing fortunes is a fascinating one, and my experience of exploring it this weekend has no doubt been coloured by watching it’s theatrical namesake; others have written more objectively and knowledgeably about the place. The Manchester Archives have some nice scans books and maps and some audio recordings of songs. A search of Flickr for ‘Pomona Manchester’ gives perhaps the most balanced sense of what people have thought of the place.

If you’re quick, Haley Flynn a self-confessed Pomona obsessive is doing guided walking tours there this weekend. Pomona-the-play continues at the Royal Exchange Theatre until Saturday the 21st, and at the time of posting tickets are still available.